So, a few weeks back I was at Target, in the toy section because I have a 5 year old boy and taking him to Target to look at toys is basically what we do for entertainment and a lot cheaper than taking him to the zoo or Tutta Bella or the bookstore…until we start buying things, that is. Even then, we can usually get out of Target for under $30.00 (in toys anyway) and when’s the last time anyone could say that about the zoo. In any case I was wandering the toy aisles when I stopped at an end-cap display and was nearly…okay, actually moved to tears by what I saw!

This is not the actual display I saw but nearly identical. I was too busy weeping to snap a pic.

That’s right folks! It was an entire line of DC Superhero (yeah, we’ll talk about how we are using that term loosely when applying it to characters like Harley Quinn and Poison Ivy) dolls, costumes, toy weapons and play sets featuring all female comic book characters!!!! Where was this when I was a child (granted I did have my She-ra, Princess of Power doll) …or even like 5 years ago because I would have been all over this shit! I wanted to buy every single one of them, skip all the way home, gleefully tear open their packages and spend hours playing with them, imagining and acting out all the scenarios in which they would kick ass, rescue Batman, Robin and Superman, I would swap their clothes, beat up the bad guys with their weapons, and find them each the perfect Breyer Horse on which to off ride into the sunset…but I did not do that. Not only did I get rid of my Breyer Horse collection like 15 years ago but I am an adult (or at least attempting to masquerade as one) and when adults spend $150.00 on dolls their spouses are usually not pleased and even less pleased when you spend hours on the floor playing with the aforementioned dolls that were formerly the money that was going to pay the car payment when you are supposed to making dinner or doing your taxes or replacing the car tabs or whatever bullshit adult task you were avoiding while you were playing with your AWESOME NEW DOLLS!!! 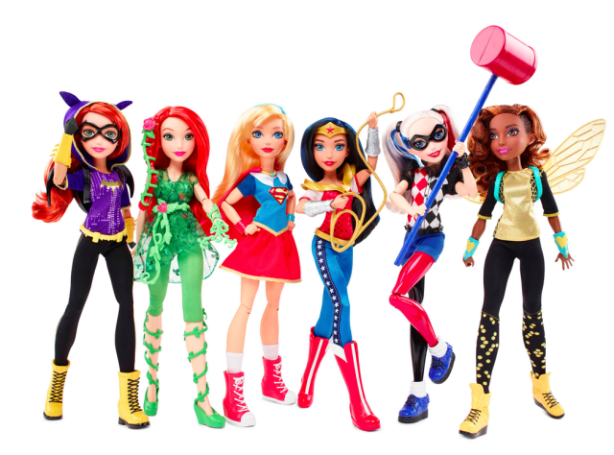 Fuck being an adult…who never gets to play with dolls! And no, playing with my son’s action figures, while they are totally awesome and fun, does NOT count. Plus, having to share things with him is a total fucking bummer. He commandeers all my favorite stuffies too! The nerve of that kid….I swear!

Perhaps the most encouraging thing about the display, that I noticed through my tears, was that it was not in the “Girl” section. I wasn’t even near the “Girl” section whose pink you can practically feel radiating off it when you walk by. It was an end-cap display right off the aisle where you find the seasonal and outdoor toys and the last aisle of what would be considered “Boy” toys that housed a bunch of Star Wars toys, Transformers, and some Batman V. Superman movie themed toys. It was just there, waiting to be noticed. And it was noticed. While I stood there, once again, crying in the middle of Target I saw two other moms come up to the display and snap pictures. One of them even turned to me, with a look of understanding that basically said she wanted to come stand next to me and shake her angry, white fist at the patriarchy while singing Helen Reddy songs. We totally shared a moment.

The other really encouraging thing about the display is that when I went back to Target, like a week and half later, they were nearly all gone! The display was practically empty! I even checked the “Girl” aisle in case they were moving them or something….not because I was totally going to buy myself Poison Ivy or Batgirl and/or maybe Harley Quinn, I was definitely NOT going to do that with part of the grocery money, because that would be totally irresponsible! The only doll left was Bumblebee, 3 lonely Bumblebees, just hanging out, waiting to inspire some young woman to greatness! And no, I don’t think the reason only Bumblebee was left has anything to do with the color of her skin (although it could be that I am just choosing to be willfully ignorant in this particular case because I am already too bummed from not getting a doll to think about the systemic and endemic racism in our country and would rather just put this whole experience in the feminist win column). I think it has more to do with the fact that Doom Patrol and Teen Titans just weren’t that popular and Bumblebee has never has her own series of books….until, of course, the introduction of the DC Superhero Girls at New York City Comic Con last October!

Now, all these cool chicks have their own books, web series, app, games, dolls, action figures (yes, there is a difference) and are basically taking the world by storm! This almost makes up for DC Comics saying, back in 2011, that “no one would watch a Wonder Woman movie”. And sadly, if they still let Zack Snyder direct it, they’ll probably be right. But alas, Zack Snyder can’t hit the mark every time….it’s not like Christopher Nolan or something, but I digress…no, I really do…because usually after saying that people keep on talking. I’m not going to do that. Okay?

Alright, I lied. I am going to keep talking about how badly I want one of these dolls and how they are much cooler than DC and Mattel’s previous pairing back in 2008.

While there’s nothing really wrong with these DC Barbies, other than the fact that they are Barbies, they seem like more collector’s items to me than something that would inspire adventurous and imaginative play for young girls. Don’t get me wrong. If I saw these on the shelf at Target today I would totally buy every last one (because how HOT is Black Canary over there?) but I would take them home, take them out of their boxes and then put them up on the shelf in my office (which at this point is imaginary…both the shelf and the office…because my “office” is just a room full of boxes that I have been too lazy to unpack for 6 months) and look at them, because they are cool and pretty to look at but not much good for anything beyond that.

I think we should all try to inspire young women to be more and do more and if seeing someone like Harley Quinn (who I guess now gets a “Superhero” pass because of Suicide Squad) who is mentally and emotionally unstable and in an abusive relationship with a criminally insane thug get her own doll, well, then I think that means any of us can do anything she wants!!! Yay for Democracy! But, sincerely, thanks to DC and Mattel for putting out these dolls, books, games and videos; they’re just really, really cool!

And thank you guys for hanging out with me, you mean the world to me! XOXO